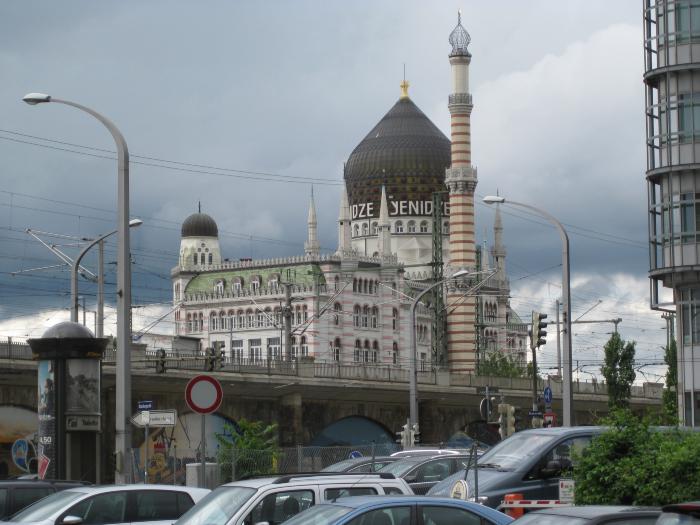 Eric Haddenham (was created by)

Yenidze Cigarette Factory, or Yenidze "Tobacco Mosque," began construction in 1907 and was completed in 1909. It was designed by Hermann Martin Hammitzsch. "Yenidze," the name of the company, comes from the cultivation area of Yenice in Macedonia. At the time, Germany was interested in Orientalism and Yenidze, a Turkish administered company, wanted Near-Eastern design elements. Because it was not part of the Baroque style of Dresden, Hammitzsch was expelled from the Reichsarchitektenkammer (the Association of Architects). It was reconfigured in 1996 by the firm Hentrich, Petschnigg and Partner. The factory shut down production in the early 1950s. After 1953, the factory was used for storage and administration. When it was remodeled, the cupola had to be renovated and the wing that had been destroyed in World War II had to be reconstructured. For the 20 meter high cupola, 860 square meters of glass had to manufactured. The reconstructed minarets are also used for ventilation. The result of the reconstruction was 7500 square meters of office space and a restaurant that extends across two floors in the lower section of the cupola where cultural events take place.