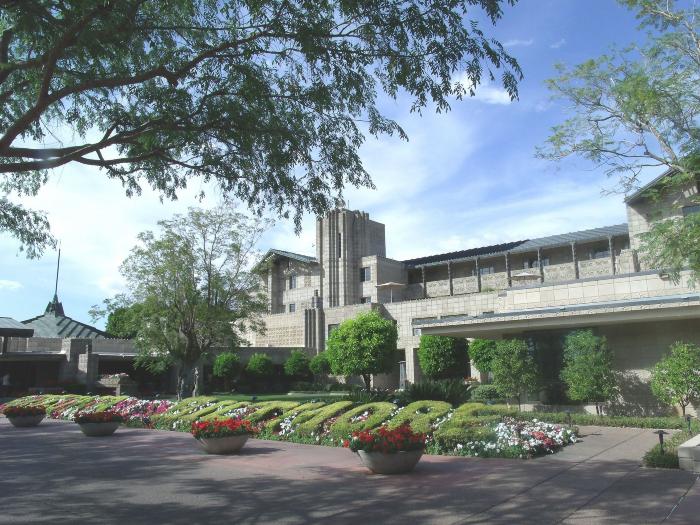 The Arizona Biltmore's architect of record is Albert Chase McArthur, yet its authorship is often mistakenly attributed to Frank Lloyd Wright, owing to Wright's on-site consulting for four months in 1928 relating to the masonry unit "Textile Block" construction. Some visitors say the hotel has the look and feel of a Wright building, especially in the main lobby, likely owing to a strong imprint of the unit block design that Wright had utilized on four residential buildings in the Los Angeles area some 6 years earlier. McArthur is indisputably the architect as original linen drawings of the hotel in the Arizona State University Library archives attest, as does the 1929 feature article in Architectural Record magazine. The two architects are a study in contrast with the famous and outspoken Wright being self taught and never licensed as an architect in Arizona. The more soft spoken McArthur was Harvard trained in architecture, mathematics, engineering, and music. McArthur obtained an architect's license in Arizona, number 338, in 1925, the year he arrived in Phoenix to begin his practice. Adding to the confusion, in recent years, FLW influences have been added to the property such as a stained glass window design entitled "Sahuaros" that Wright had designed as a magazine cover for Liberty Magazine in 1926 and was fabricated by Taliesin students and installed during the 1973 hotel renovations and restoration. Reproductions of the geometric 'sprite' statues originally designed by sculptor Alfonzo Iannelli for Wright's 1915 Midway Gardens project in Chicago are placed around the property. Also, the original hotel solarium of 1929 was converted to a restaurant in 1973 and since the mid-1990's has been named 'Wright's'. Authorship of the hotel's design is not a new dispute. Wright has variously condemned McArthur's use of the block system [Wright wanted square blocks as opposed to McArthur's mathematically proportioned rectangle block that was used] and publicly claimed credit for the building's design. Wright issued a carefully-worded letter in 1930 that was published in The Architectural Record (quoted in Brendan Gill's "Many Masks"): "All I have done in connection with the building of the Arizona Biltmore, near Phoenix, I have done for Albert McArthur himself at his sole request, and for none other. Albert McArthur is the architect of that building -- all attempts to take the credit for that performance from him are gratuitous and beside the mark. But for him, Phoenix would have had nothing like the Biltmore, and it is my hope that he may be enabled to give Phoenix many more beautiful buildings as I believe him entirely capable of doing."