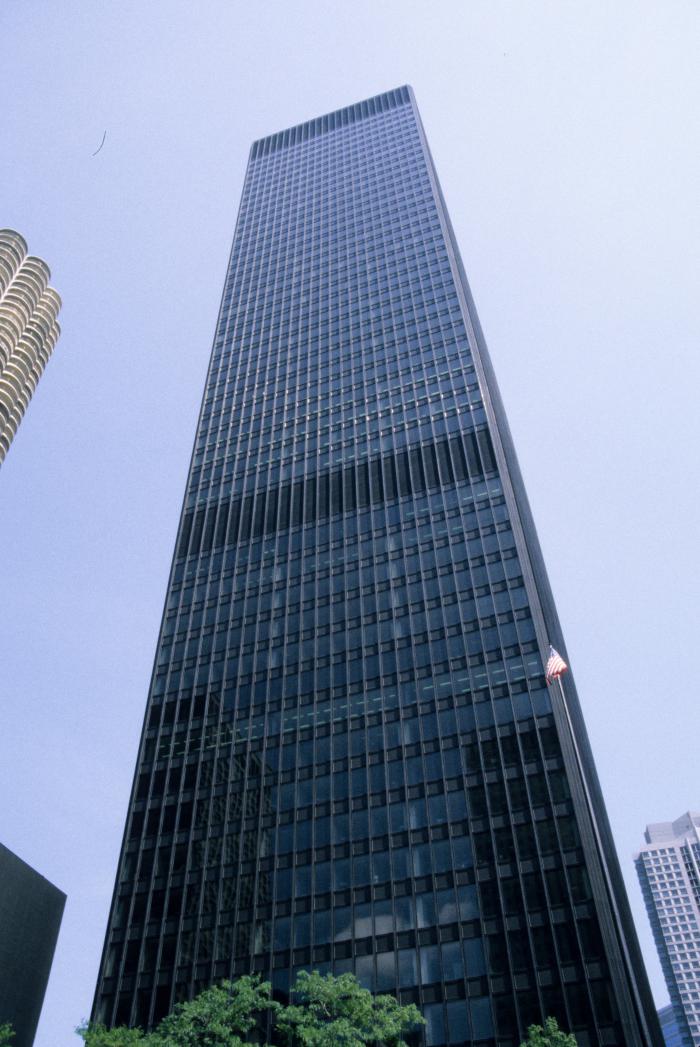 "On April 20, 1967, IBM announced that it had an option to purchase a 1.5-acre parcel of downtown Chicago property owned by Field Enterprises, Inc. The irregularly-shaped property, occupied by a parking lot, was bounded by the Chicago River, North State Street, East Kinzie Street and North Wabash Avenue. IBM purchased the site in September. On June 18, 1968, IBM released details of the building it intended to construct on the site. The architect was Ludwig Mies van der Rohe and the engineers were C. F. Murphy Associates. The building would be 52 stories tall, rising 695 feet from ground level. It would be rectangular, measuring 125 feet on the north and south sides and 275 feet on the east and west sides. There would be 46 floors and 1,358,260 square feet of net rentable space above the plaza level; gross square footage would be 1,780,000 square feet. The building would weigh 275 million pounds, be served by 32 elevators in four banks of eight elevators each plus three freight elevators. At least two floors of the building would include major computer facilities. One IBM Plaza (330 North Wabash Avenue) opened in 1971 and was officially dedicated on September 20, 1972. Shortly after its construction, One IBM Plaza won the Federal Energy Commission's first Midwest Excellence Award for Energy Conservation. In the 1970s, the facility served as the Midwestern Region headquarters of the IBM Data Processing Division." --http://www-03.ibm.com/ibm/history/exhibits/vintage/vintage_4506VV8010.html