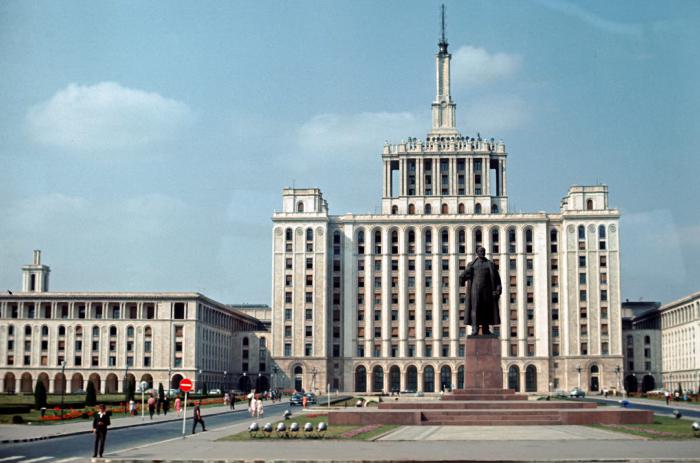 Formerly known as Casa Scanteii, it was designed by the Romanian architect Horia Maicu, in the style of Soviet Socialist Realism and resembles the main building at Moscow State University. The building houses newspaper headquarters. This image shows a statue of Vladimir Lenin, which was placed in front of the building in 1960 by Romanian sculptor Boris Caragea. The statue was removed on March 3, 1990, following the Romanian Revolution of 1989 and only the statue's pedestal remains. Bucharest, the capital of Romania, was planned within an urban system, with Bucharest as the central nucleus of other surrounding urban localitites. By the 1970s, numerous large housing complexes were built. This image was taken in 1970 by John Schooley, FAIA, during an Urban America tour. Urban America tours allowed architects and planners to visit planned communities and meet professionals involved in their planning and continued development. Keywords: Romania, Bucuresti (municipality), Bucharest, sculpture, outdoor spaces, plaza. Submitted by John Schooley, FAIA.