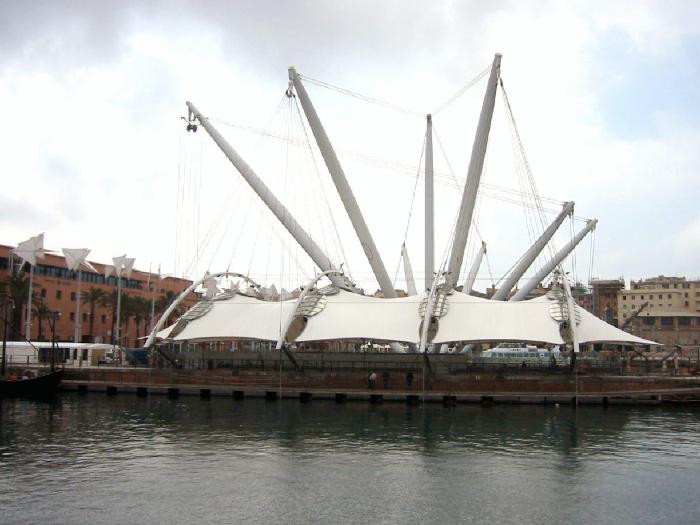 Renzo Piano (was created by)

"The Bigo, a gigantic derrick that was the symbol of the 1992 Columbus Exposition and now serves as a powerful reminder of the return to the city of one of its most important areas, the ancient port."
"At the end of the 1980s, the municipality of Genoa decided to organize an international exhibition to celebrate the 500th anniversary of Christopher Columbus' discovery of America. The site selected for the event was part of an old port, still operational at the time, although it was eventually retired from service and replaced by a modern port. This provided a great opportunity to renovate a historic district of the city and, in particular, build new, permanent installations. An essential consideration was that the project had to create a link between Genoa's historical center (along the port) and the sea. Such a link had never existed over the centuries, having been made impossible, first, by the existence of ramparts, then warehouses, a railroad, harbor customs barriers and, more recently, a highway. Undertaking this project would be tantamount to performing open-heart surgery on the city. The challenge was two-fold: on the one hand, to transform wharves dating from between the 17th and 20th century into public spaces. On the other hand, to develop a very strong relationship between the port and the old city. This also afforded an opportunity to reclaim one of the largest European historic centers. (The idea had grown from a 1981 model urban renovation project for an old district in Genoa, Molo Vecchio.)" -- Renzo Piano website