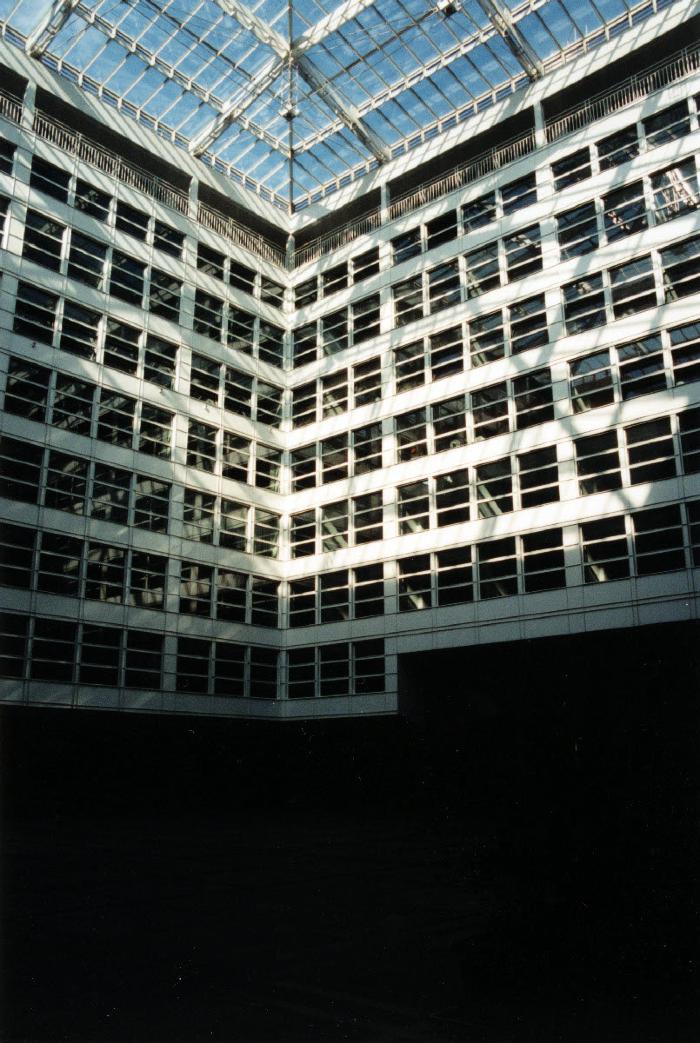 "The block is constructed on a modular system developed by Josef Paul Kleihues; he also designed the internal structure, the facade design of the courtyard, the rear residential building between Mohrenstrasse and Kronenstrasse and the building in the center of the block facing Friedrichstrasse. The nucleus of the block is a glass-covered inner courtyard of 1000 square-meters. Between this courtyard and the street are narrow staircases. Into the empty spaces between the street the courtyard and the staircase, three other architects have inserted their buildings - if it is actually possible to say that they have their own style, because the storey levels, access structure, ground plan, module grid, stone facing and the height of the eaves and ridges were defined beforehand, as was the structure of seven full storeys and two staggered storeys. The architects were therefore only responsible for choosing the window proportions, the detail design and the material and color of the facade." -- Kieren, M. (1998). Neue Architektur, Berlin 1990-2000. Berlin: Jovis. p.68-69. Architects: Josef Paul Kleihues (Haus A,C,D); Klaus Theo Brenner (Haus B); Vittorio Magnago Lampugnani/Marlene Dorrie, Frankfurt a.M. (Haus E); Walther Stepp (Haus F) This image was taken in 2001 by John P. Schooley, FAIA, during the 'Berlin: Building the New City' tour. This tour was planned for architects and planners so that they could see first-hand how this once-divided city emerged from the Cold War to become a leading commercial and cultural center in Europe. Keywords: Germany, Berlin, Kontorhaus Mitte. Submitted by John Schooley, FAIA.