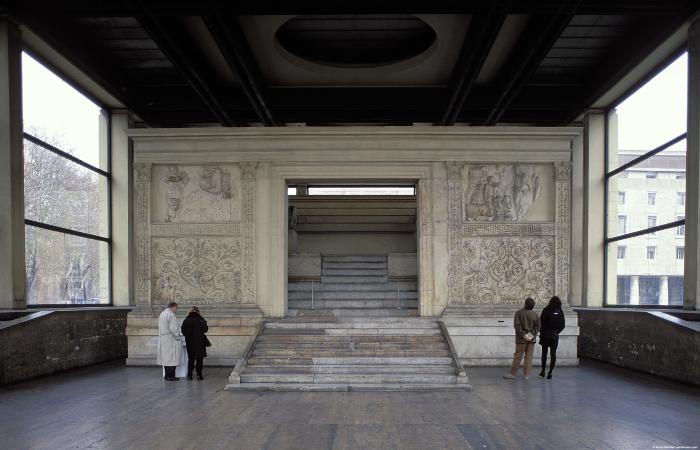 unknown (was created by)

Dedicated on 30 January 9 BCE, the altar was erected in the Campus Martius by the Roman Senate to commemorate Augustus' return from Spain and Gaul on 4 July 13 BCE. The best-known exemplar of Augustan art, it is typified by its eclectic mix of Classical and Hellenistic elements and skillful amalgam of Roman myth-history and contemporary events.
The altar itself rests inside a square enclosure made of Carrara marble. All the surfaces are decorated with friezes and reliefs.
The altar, which was placed in the Campus Martius, or the field of war, was probably destroyed after Rome fell to the Barbarians. Early in the 1900s, pieces were traced to museums in Florence, Rome, and Paris, while other pieces were found in excavations. In the late 1930's, Mussolini ordered the altar's reconstruction and installed it in a building designed by Vittorio Ballio Morpurgo beside the Tiber next to the ancient tomb of the Emperor Augustus. Today, the Ara Pacis is installed in a new museum designed by Richard Meier, which opened in 2006.