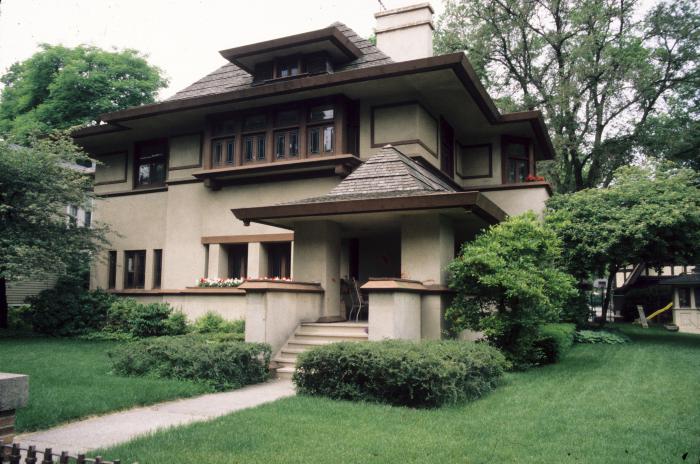 "In 1900, Nathan Moore approached Wright requesting the building of a house for his daughter Mary and her new husband, Edward R. Hills. The house was to be built around anther Stick-style house that Moore had purchased. While at first Moore was against Wright design, requesting for himself an English Tutor style house in 1895, (Nathan G. Moore House), he allowed Wright more freedom with the Design of the Edward Hills House. Therefore the house took on Wright's signature Prairie Style. Edward and Mary Hills hired another architect, Henry Fiddelke to carry out a series of alterations to the house. In 1976, the upper floors were destroyed by fire. The DeCaros, who then owned the house, spent the next two years returning the house to its original condition based on original Wright plans. The Hills-DeCaro House is said to be one of Wright's most Japanese-influenced designs. Wright would later write that he was influenced not so much by Japanese architecture as by an aesthetic that pared things down to their essential forms." Cannon, P. F. (2006). Hometown Architect: The complete buildings of Frank Lloyd Wright in Oak Park and River Forest, Illinois. San Francisco: Pomegranate. p.61-62