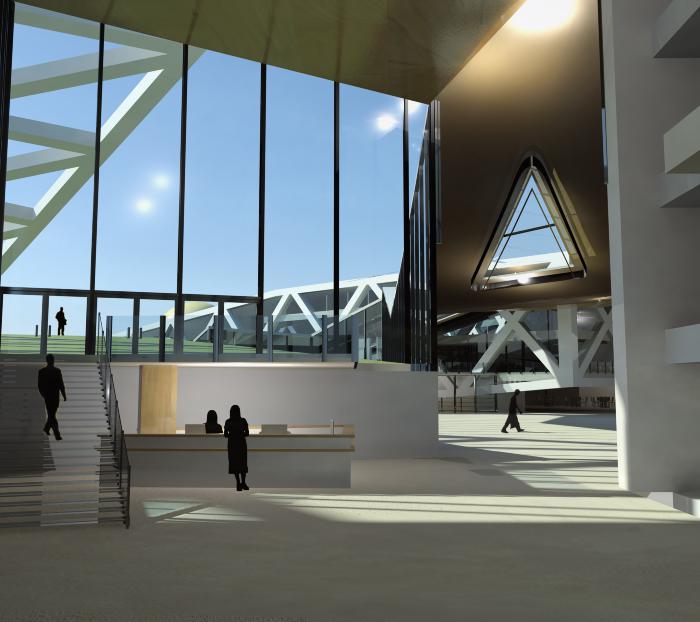 Titled "Environmental TRUSSt", this project by Tim Cousin was selected as the 1st Place winner in the 2010 Gui competition.
The James E. Gui '54 Design Competition was established in 1996 through gifts from James E. Gui (B Arch 1954). Knowlton School of Architecture students take two quarters of their senior year to develop a design project in competition with fellow classmates.
The fourth year of the undergraduate program synthesizes the previous years' investigations of form, technique, materiality, and organization. Studios are advanced studies in contemporary architectural production and are supported by architecture seminars and university electives. Design projects are extra-large in scale, with hybrid programs on sites that straddle landscape and urbanism.
The first quarter project is an extended investigation of housing with additional amenities on an exurban site. The second quarter features the Gui Competition, which entails an institutional program on an urban site. During the final quarter, students may join vertical studios, the Italy Study Abroad Program, or pursue an independent honors project.
"As a play on its structure and commitment to better its surroundings, Environmental TRUSSt translates the charge of the EHHEC as a public health/knowledge dissemination and environmental research foundation into an organizational concept which creates an architecture that is at once both engaged with the city and the site ecology.
Carrying water to Lake Erie, Doan Brook flows through a large culvert under a corner of the existing site. On its way, it receives an unfortunate amount of sewage and waste due to an old practice of combining sewer and storm water that is still implemented in this area of Cleveland, Ohio.
In combination with cleansing rainwater runoff through a series of research gardens, this project proposes to uncover, re-route, and filter the brook as it flows through a new, natural wetlands. These water-cleansing areas will serve as gardens which will transform this site into a productive, verdant, and diverse landscape amenity.
Private functions such as environmental and medical research take place within the constraints of the trussed structure that zigzags its way between the edges of the site as it gradually negotiates the existing slope of the site while connecting to existing adjacent parking structure. The roof surface serves as public space that connects the wetlands at grade to the experimental greenhouses located above.
A central exhibition and educational space seamlessly meanders between public and research zones, both interior and exterior. This space also serves as a direct path that connects the various entrances across the building and site." -- Tim Cousino This work is a part of the online collections of the Knowlton School of Architecture Student Archives, The Ohio State University. It is part of an effort to make accessible student work ranging from the first student that graduated from the program in 1903 to the present.