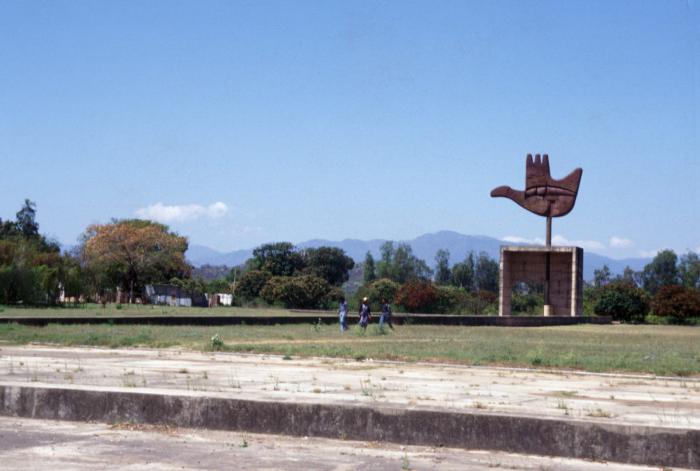 Soon after winning its independence in 1947, India set about to build a new capital for the state of Punjab. An open site to the north of Chandigarh was chosen, and a number of western architects were brought in to create a fitting monument to the new India. Chief among them was Le Corbusier, who over the course of more than a decade would construct three of the four planned programmatic complexes (Secretariat, Palace of Assembly, and High Court), as well as a number of smaller, supplementary projects (school, art museum, and yachting club). "Although the layout of Chandigarh was cosigned by [American architect Albert] Mayer, for the first time after numerous set-backs - Rio (1938), Algiers (1942), Saint-Die (1945), La Rochelle (1946), Bogota (1950) - Le Corbusier finally saw his principles for the 'organization' of the city materialize, drawing on the lines of his Ville radieuse, minus the skyscrapers." (p. 112) "He had intended to fit a certain number of symbol-monuments into the composition of the Capitol: an S shape depicting sunrise and sunset in front of the 'fosse de la Consideration,' a 'tower of Shadows' as a celebration of the Modular, the monumental sculpture 'La Main ouverte,' and so forth. The first sketch of that steel emblem dates back to 1951; it was finalized in 1964 and finished in 1985." (p. 112) Above selection from: Lyon, D. (2000). Le Corbusier alive. Paris: Vilo International. Keywords: India, Punjab, Chandigarh, capital, capitol, government, monument, sculpture, beton-brut. Submitted by Abul Quasem Abdullah.