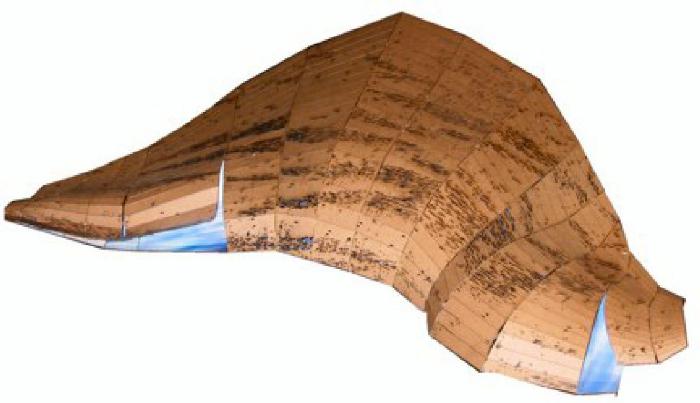 Brandi Nussbaum (was created by)
Kevin Noble (related to)

This was a student project by Brandi Nussbaum and Kevin Noble for Stephen Turk's ARCH 630 course, Autumn 2006. "The case study of NOX's H2O Expo argued 'topological vagueness', which NOX described as a language of movement where events emerge from the interaction between a less determined architecture and the body. Research of contextual forces that influenced the original project laid the foundation for a new version, which emerged from the old form but whose structure included its context, an extension of the surrounding landscape. As a critique of NOX's project, which had only allowed the 'effects' of their simplistic architecture and its interaction with the body to happen on the interior, the new version created a fabricated 'effect'through perforations along the surface which suggested patterns of movement and established a new dialogue between the interior and exterior; the original project and its context. Passage of light through these perforations also created new optical effects, which changed based on the movement of people through the building and those along its exterior surface." -- Brandi Nussbaum and Kevin Noble This work is a part of the online collections of the Knowlton School of Architecture Student Archives, The Ohio State University. It is part of an effort to make accessible student work ranging from the first student that graduated from the program in 1903 to the present. Keywords: student work, KSA, drawings and plans.