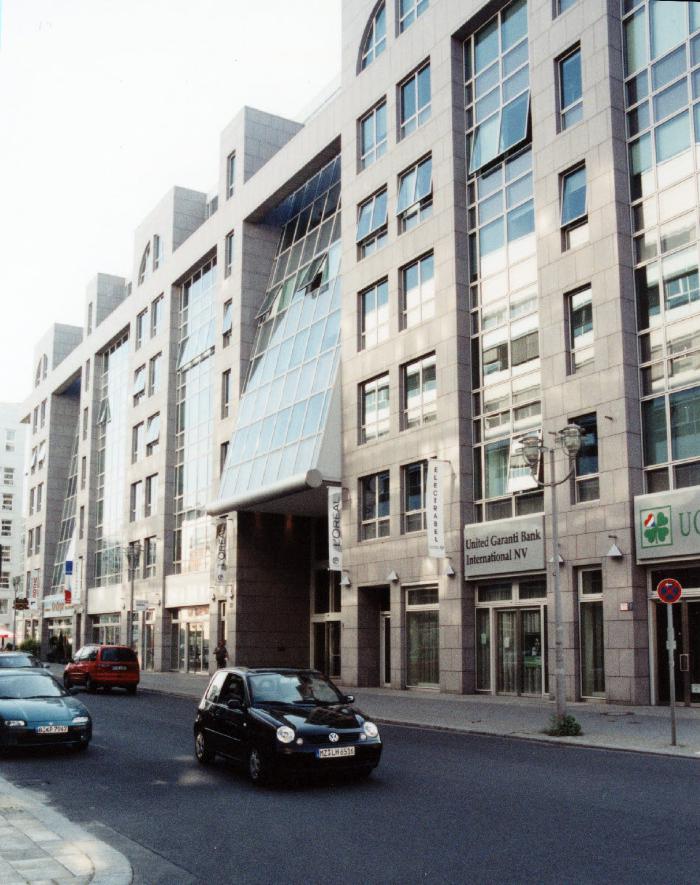 Located in the Friedrichstrasse, Philip Johnson Haus (Philip Johnson House, also called the Quartier 200 or American Business Center at Checkpoint Charlie) office block is an example of several developments in urban architecture; whereas there used to be numerous single buildings forming the street edge around a block and leaving the center free as courtyards, there is now one single structure covering the total block area. The house is distinguished by its sunlit glass and brick facade, and its entrance foyer. The foyer lies in the center of the structure and is accessible from any one of the four sides. Checkpoint Charlie, a symbol of the Cold War in Berlin (1961-1990), is the border crossing between the American and Soviet districts of Berlin. After Helmstedt ("Alpha") and Dreilinden ("Bravo") it was the third checkpoint and could only be used by foreign nationals and military personnel during the time of the Berlin Wall. In October 1998 as a part of the process of artistically restructuring the former inner-city checkpoints, a complex of six buildings, the "Business Centre" with offices and commercial premises was erected on Friedrichstrasse. Buildings on the west side of the area were developed by American architects, and those on the east side of the area were developed by German architects. This image was taken in 2001 by John P. Schooley, FAIA, during the 'Berlin: Building the New City' tour. This tour was planned for architects and planners so that they could see first-hand how this once-divided city emerged from the Cold War to become a leading commercial and cultural center in Europe. Submitted by John Schooley, FAIA.