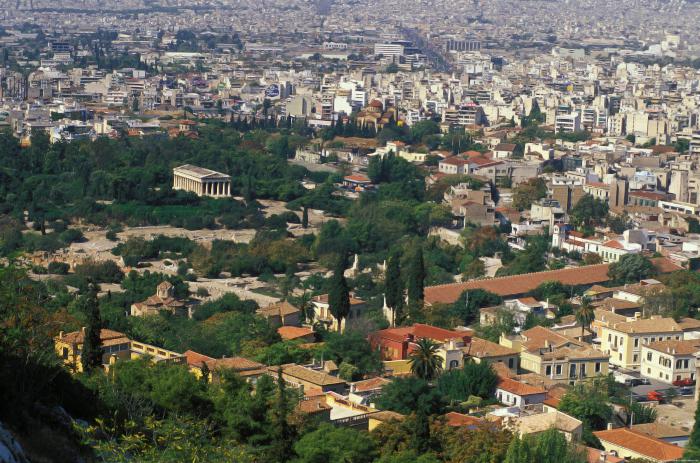 The Roman Agora, a rectangular courtyard surrounded by stoas, shops and storerooms, is located on the north side of the Acropolis, east of the Greek Agora. It was completed in the 2nd Century C.E. with funds from Julius Caesar and then Augustus. The Gate of Athena Archegetis (Athena the Leader) from the 1st century B.C.E. is a Doric gateway (or propylon) that marks the western entrance to the Roman Agora. The Ionic east propylon leads to public latrines (vespasianae) and the "Tower of the Winds", a structure that serves as an elaborate water clock (on the inside), sundial (on the outside), and weather vane (on top).
"During the reign of Hadrian the court was paved with slabs. After the invasion of the Herulae in 267 C.E. the city of Athens was restricted to the area within the Late Roman fortification wall, and the administrative and commercial center of the city was transferred from the Ancient Agora to the Roman Agora and the Library of Hadrian. During the Byzantine period and the Turkish occupation the area was covered with houses, workshops and churches along with the Fethiye Mosque." -- www.culture.gr/2/21/211/21101a/e211aa04.html
The Archivision Collection of Ancient Sites was funded by the Jack Martin Balcer Library Endowment.