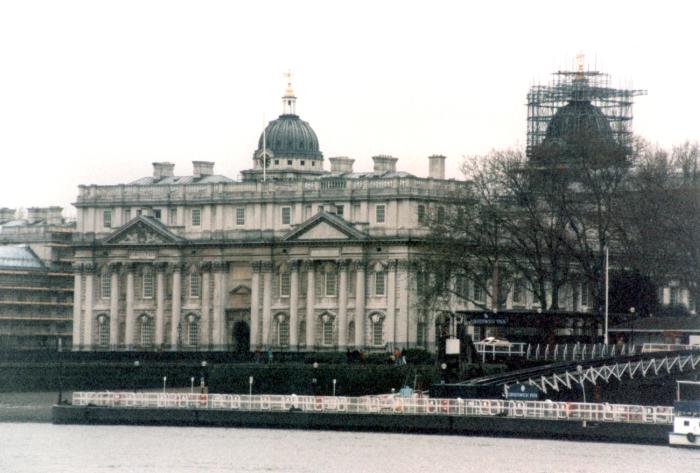 "John Webb's existing --King's House of 1664-69 became the cornerstone of Wren's grand design. His first plan was for a great three-sided court facing the river, with a grand Chapel as its focal point. However, just before her death Queen Mary forbade it. She wanted the "vista" from the Queen's House to the river to be preserved, leaving the the Queen's House as the focal point." "When land was acquired to the west, in the mid-19th century, Philip Hardwick created the landscape plan much as we see it today, with walks and lawns for the Pensioners to enjoy. Railings and new gates were erected all round the site, and the lawns to the west were laid out, with their dolphin fountains. Hardwick also designed the monument to the young French naval officer, Joseph Rene Bellot, who drowned in 1853 while helping search for Sir John Franklin's lost Arctic expedition. Although this stands on the river walk, outside the grounds, it forms part of Hardwick's overall landscape design." http://www.oldroyalnavalcollege.org/the-architecture-of-the-old-royal-naval-college,25,AT.html