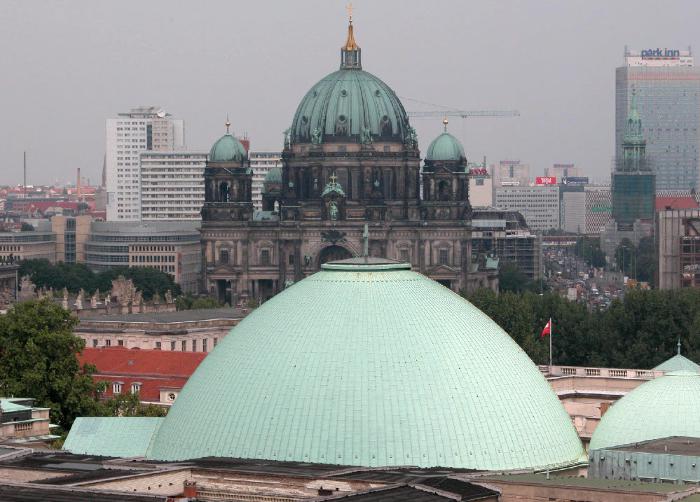 Foreground building: "St. Hedwig's Cathedral is the diocesan church of the Archdiocese of Berlin and the most important Roman Catholic ecclesiastical building in the city. "As a sign of the religious tolerance of Prussia, Friedrich II. gave permission for it to be built, financed by donations from all over Europe. The church, behind the Staatsoper on Bebelplatz, was built from 1747-73 to plans by Wenzeslaus von Knobelsdorff, who drew inspiration from the Pantheon in Rome. Johann Boumann the Elder supervised the construction; the dome, initially executed in wood, and the gable frieze were only completed in 1884-87 because of problems during construction. It has served as the cathedral of the Archdiocese of Berlin since 1929. "Under the leadership of the dean Bernhard Lichtenberg, who died in prison and who was beatified in 1996, St. Hedwig's Cathdral became one of the centers of Catholic resistance. Badly damaged in the Second World War, the cathedral was rebuilt from 1952-63 to plans by Hans Schwippert, at which time a new, reinforced concrete dome was added. The interior was also extended and modernized during reconstruction." --http://www.berlin-tourist-information.de/cgi-bin/sehenswertes.pl?id=13500&sprache=english Background building: The Berliner Dom (Berlin Cathedral) serves as the focal point of the Protestant Church in Berlin. It was also the official cathedral of the Prussian Hohenzollern royal family. It was damaged May 24, 1944 by bombing during World War II and subsequently repaired. Its official name is Oberpfarr und Domkirche zu Berlin. Keywords: Germany, Berlin-Mitte, Saint Hedwig, Berlin Cathedral, Berliner Dom. Protestant Cathedral, ceremonial and/or religious structures, dome, domes. Submitted by Sandhya Kochar.