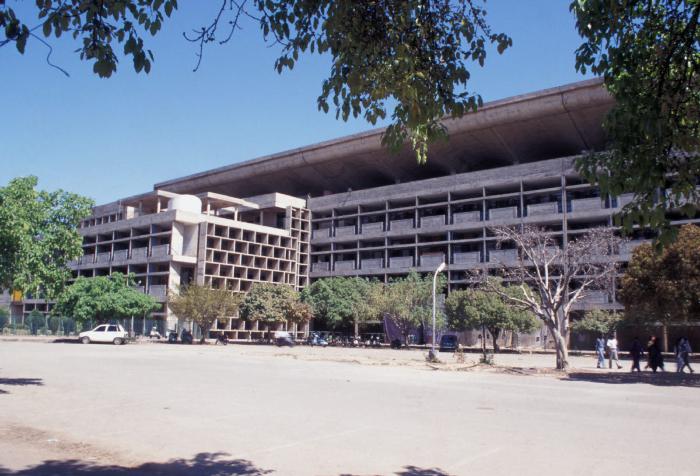 Soon after winning its independence in 1947, India set about to build a new capital for the state of Punjab. An open site to the north of Chandigarh was chosen, and a number of western architects were brought in to create a fitting monument to the new India. Chief among them was Le Corbusier, who over the course of more than a decade would construct three of the four planned programmatic complexes (Secretariat, Palace of Assembly, and High Court), as well as a number of smaller, supplementary projects (school, art museum, and yachting club). The Secretariat is the largest building in the Capitol complex. It houses administrative functions in eight stories.
"Although the layout of Chandigarh was cosigned by [American architect Albert] Mayer, for the first time after numerous set-backs - Rio (1938), Algiers (1942), Saint-Die (1945), La Rochelle (1946), Bogota (1950) - Le Corbusier finally saw his principles for the 'organization' of the city materialize, drawing on the lines of his Ville radieuse, minus the skyscrapers." --Lyon, D. (2000). Le Corbusier alive. Paris: Vilo International. p. 112.