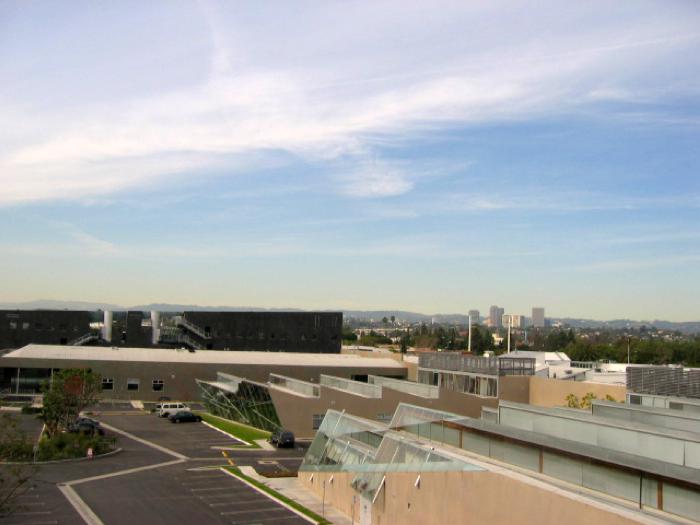 Stealth: "The design of the Stealth began as a consequence of remediation required for earth removal on what was formerly an industrial site. An existing 16,000 square foot warehouse was demolished and the substandard earth was removed. Rather than filling the hole, the excavation was re-shaped to form a large sunken courtyard, which is to be used for outdoor theatre seating. Six hundred removable seats face the adjacent stage. A long-span truss above allows for uninterrupted views to the proscenium from the courtyard. The 315-foot long, 60-foot high building is accessed via a glass enclosed central elevator lobby and building core. The building shape evolves over its length, providing a constantly varying sequence of exterior end interior space. " Slash and Backslash: "The two office buildings were originally part of an uninterrupted fabric of wood frame truss roofed warehouses that had been added to sporadically since the 1940's. The design strategy involved a 'Haussmanization' of the original agglomeration of buildings. Most of the old construction was demolished, cut out and removed on existing column support lines using dimensions that allowed the required interior footages and, in addition, on-grade parking between the two buildings. Since surface parking was insufficient a 4-level steel structure was designed next to the pair. The sides of the two warehouse buildings were finished simply with plaster and provided with large, operable windows. The south elevation forms - which engendered the monikers Slash and Backslash - were entirely glazed and inclined at angles which cut precisely through the original wood frame/truss roof/post supported structure. The slice exposes the original wood structure in an unusual way - a consequence of the inclination of the cut. Where the now sliced roof was structurally inadequate a series of new steel pipe supports and braces were added within the faÃ§ade." - http://www.ericowenmoss.com