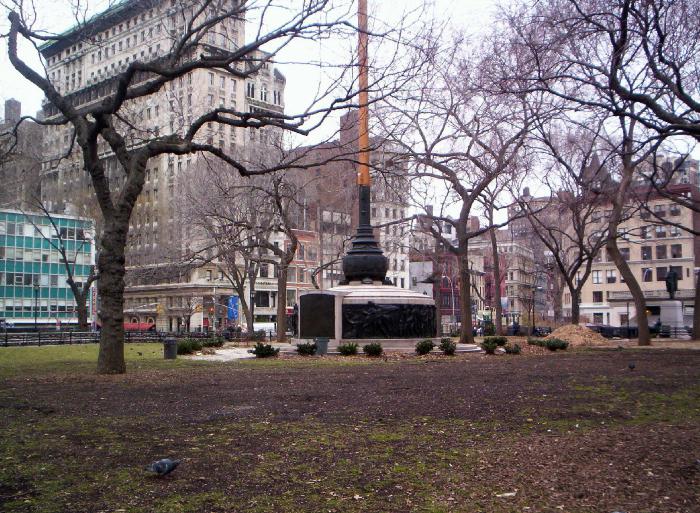 This site was authorized by the State Legislature as Union Place in 1831 and acquired by the City of New York in 1833. In 1839 Union Square was opened as a public park. The design emphasized the park's oval shape and focused on a large central fountain installed for the opening of the Croton Aqueduct in 1842. In 1871 Parks Engineer in Chief M.A. Kellogg and Acting Landscape Gardener E.A. Pollard collaborated on a new park plan. One year later, the park was redesigned by Frederick Law Olmsted and Calvert Vaux. The iron fence was removed and sidewalks were widened to make the park more suitable for large gatherings. In 1928-29 Union Square was completely demolished to accommodate a new underground concourse for the subway. Alterations made in the 1920s and 1930s included the straightening of park paths, the construction of a colonnaded pavilion.
Threatened by general misuse, deterioration, and the presence of drug dealers in the 1970s, Union Square has recently undergone a dramatic transformation. In 1985 major renovations under Mayor Edward I. Koch included creating a new plaza at the south end of the park, relocating paths to make the park more accessible, planting a central lawn, and installing new lighting and two subway kiosks.
Two new playgrounds were constructed in 1993-94, and a restaurant opened in the sunken courtyard outside the pavilion in 1994. In 1997 the United States Department of the Interior designated Union Square Park as a National Historic Landmark because of its significance in American labor history. - -http://www.nycgovparks.org