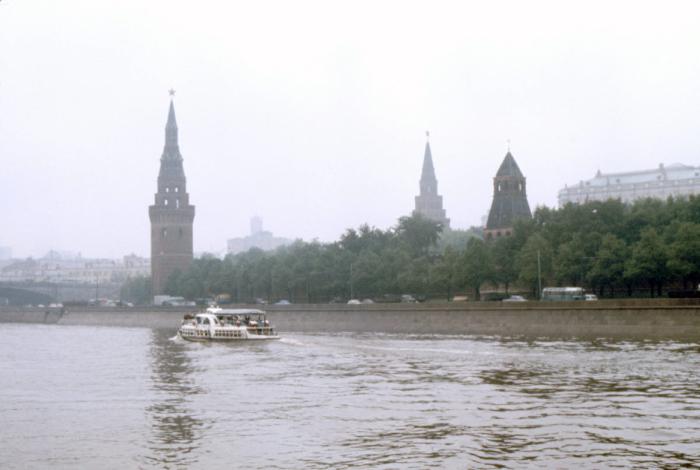 View from Across River

The Moscow Kremlin is a symbol of the Russian state and is one of the largest architectural complexes of the world, including architectural monuments of the 14th - 20th centuries. In 1990, the Moscow Kremlin and its treasures, Red Square and Aleksandrovskiy Sad (the Alexandrov Gardens) were added to the UNESCO World Heritage List.
Built by Anton Fryazin, the Water Supplying Tower (Vodovzvodnaya, the tower on the left in the image) stands at the south-west corner of the Kremlin. Its height with the ruby star is 61.25m. The Borovitskaya Tower (Predtechenskaya, the tower in the middle) was built in 1491 by Pietro Antonio Solari and was an entrance passage to the services area of the royal estate. Its height with its star is 54.05m. The Annunciation Tower (Blagoveschenskaya, the tower on the right) is a typical quadrangular tower on the south wall. The tower's height with the weathervane is 32.45m.
The State Kremlin Palace (originally, the Palace of Congresses) is a 6000-seat hall, equipped for performances or public meetings and congresses. It is a public building and theater.
This image was taken in 1969 by John Schooley, FAIA, during an Urban America tour. Urban America tours allowed architects and planners to visit New Towns and meet professionals involved in their planning and continued development.